Our Newsletter: The Southern Yarn

Staying in touch with things down under is one of the functions of the Down Under Club of Winnipeg. 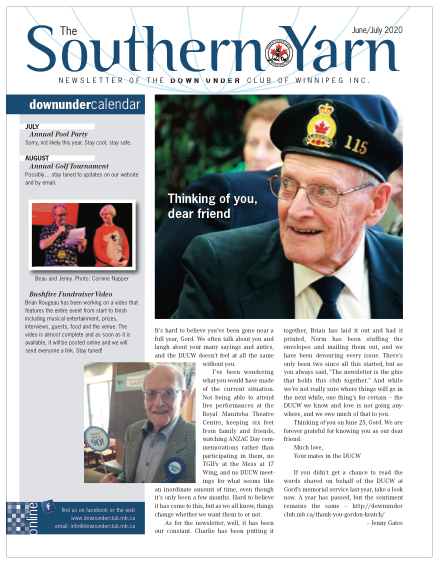 In addition to contributions from many club members, editor Charlie Powell gleans the web and other sources for tidbits of information that might slip through the cracks of the usual sources, then prints them in our newsletter, The Southern Yarn.

Below are issues of our newsletter in PDF format. They differ from the printed version in that they are in color and may contain additional pages of information and photos that did not fit in the print version. To view them you require the Acrobat Reader software that runs on almost any computer system and can be downloaded free from Adobe.

Members of the DUCW receive their copies by email, or regular mail on fabulous yellow paper! Learn more about becoming a member.

This year’s issues of The Southern Yarn,…

Back issues of the Southern Yarn will be combined into a single big PDF next, so check them out above before they get archived into one file.

The 2012 issues of The Southern yarn have been combined into a single big (10.5 Mb) PDF file. You can download the 2012 Yarn collection here (be patient) and then scroll through 89 pages. Paper copies of back issues are available from the club, and we have a few of the previous years on disk as well.

We welcome contributions of all kinds to our monthly issue of The Southern Yarn, as long as they are related to club activities or interests pertaining to ‘Down Under’ themes.

There are several ways for you to send us a story:

The type of content we enjoy receiving from members and contributors includes:

EDITOR: Charlie Powell writes and researches the bulk of the content for the website and our monthly newsletter, The Southern Yarn.
Tel: 1-204-275-7083 • email: editor@downunderclub.mb.ca

DESIGNER: Brian Hydesmith designs and manages the website and our newsletter. He is a graphic designer (Hydesmith Communications), located in Winnipeg. • Tel: 1-204-487-0067

We would like to acknowledge the members of our club along with many web sites that have provided us with excellent material for our site. We also thank Jenny Gates for her many years of work as Editor for The Yarn. Please review our links page for reference to extensive list of sites we refer to. We welcome your feedback in keeping this site current, accurate, interesting and useful.

37 thoughts on “The Southern Yarn”

If you suspect you or a family member has coronavirus you should call (not visit) your GP or ring th [...]

Inside a COVID-19 test lab, where negative results are positive news

From throat swab to high-tech lab and back again in under 24 hours. This is COVID-19 testing in Sydn [...]

NSW Health says COVID-19 testing for anyone is inevitable

Every Sydneysider will be tested and retested for coronavirus before the pandemic abates, as rapid a [...]

The letters confirm the worst fears of those who viewed Governor-General John Kerr’s sacking of the [...]

'Palace letters' show the queen did not advise, or encourage, Kerr to sack Whitlam government

There are many questions regarding The Dismissal that can still be debated. But the queen simply adv [...]

Many people experience love differently. But regardless of the differences in how it's experien [...]

The COVID-19 pandemic has hit the production side of the economy, So how will tax cuts for those on [...]

Our cybersecurity isn't just under attack from foreign states. There are holes in the government's approach

Legislation expected to be put to Parliament later this year may very well fall short due to COVID-1 [...]

Comment Judith Collins used an unusual prop for her debut appearance as the National Party leader – [...]

Veteran MP Judith Collins is known to many across the country by a name she does not much care for – [...]

Grounded: Qantas cancels all international flights from Australia until March 2021

If Aussies were holding out hope that flights overseas may trickle back by Christmas given some Aust [...]

Trial for trio accused of laundering money through ANZ

Three people accused of using ANZ branches across Auckland to launder dirty money and of structuring [...]