The latest version of The Southern Yarn is ready for you now, Check it out. And here is the editorial to get you started. 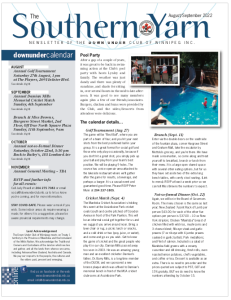 As I put this issue together, Folklorama is about to begin its 2-week run here in Winnipeg. Being the first time back, after COVID*, there are only 12 pavilions each week – about half of the usual number. Perhaps a post-COVID strategy on the part of the Folk Arts Council, or just a reality of the times – like our DUCW, members are few and sadly volunteers can no longer muster the oomph to plan and execute such a major undertaking. At least we have fond memories of our glory days. So we try to keep something of our history and culture alive as best we can – not least by this our Yarn. Read on and you will learn of a saint and a sinner, sand and scrabble, as well as more about Vegemite and cricket. END_OF_DOCUMENT_TOKEN_TO_BE_REPLACED THANK YOU, Winnipeg, for your generous support of our bushfires fundraiser.

We are SOLD OUT, and tickets will NOT be available at the door.

If you would still like to help, we are accepting donations. Any amount is welcome, but donations of $20 or more will get a tax receipt from the Canadian Red Cross for monies sent to the Australian Red Cross Disaster and Relief Recovery Fund. To make a donation, contact Peter Debenham at 204-955-0393.

The devastating bushfires in Australia are continuing to take an almost unimaginable toll on that country. At least 34 people have died, livelihoods have been lost, countless native animals and livestock populations have been decimated, and millions of hectares of land have been burned beyond recognition. END_OF_DOCUMENT_TOKEN_TO_BE_REPLACED

The following words were shared on behalf of all the members of the DUCW at the memorial reception for Gord on Thursday August 8. Twenty four Club members attended the service to say farewell and thank you to our dear friend.

Ah Gordon, you were the best mate any of us could ever hope for, especially those of us in the Down Under Club of Winnipeg.

We loved your kind and generous heart, your wit and wisdom, and your willingness to step up whenever anything needed to be done. You were our friend, mentor and sage, and despite umpteen years as a Canadian citizen, you were still a fair dinkum Aussie through and through. You loved the AFL, cricket, lamingtons, pavlova, the Australian anthem, and wearing a kangaroo embroidered baseball cap. You still even had your accent, and you loved the Down Under Club. Please pardon the late production of the November issue of The Southern Yarn. (Brian H takes full responsibility for its lateness!) For those awaiting it in the post, rest assured that it is probably en route via the postal buycialisquality.com system as you read this. For those modern and/or impatient folks amongst us, you can read the November Yarn right here by downloading the PDF via the magic of the Internet.